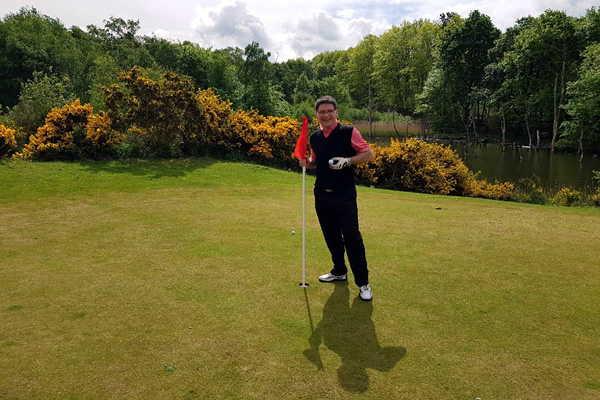 A local businessman has become the first golfer to get a hole-in-one at a Mansfield course.

Steve Alcock, a member for the last few years at the CaddyShack Golf Centre on the Oak Tree Estate, holed his tee shot on the short but tough twelfth hole.

He puts his stroke of ‘luck’ mainly down to his perfect golf swing but also admits it may be partly down to the much improved condition of the greens and course in general.

CaddyShack (formerly known as Mansfield Golf Club), situated on Jubilee Way North, was renamed and has been under new ownership since last November.

Managing Director and PGA pro, Shaun Smith says: "It was a great day for Steve!

"Everyone at CaddyShack was very happy for him, especially with the bottle of single malt Steve left on the bar that day!!"

The eigheen-hole golf course has been open for ten years this year but the driving range has been in operation since the early 1990s.

Part of the course was pit tip and landfill but a number of holes are cut out of the existing woodland and gorse, making for some very picturesque and tough golf holes. They even have wild Deer and Stags, roaming on the course.

The new ownership are also on a mission to greatly improve the facilities and customer experience at the centre and have now replaced all 10,000 balls on the driving range, along with opening the only nine-hole FootGolf course in Mansfield.

FootGolf, basically kicking a football into a flagged extra large hole on the green, is now one of the fastest growing sports in the UK.

Smith added: "We opened the FootGolf at Easter and are continuing to see growth in numbers and are now hosting FootGolf birthday parties - the kids play then have food and even a disco in the function room.

"CaddyShack is now a bit of a ManCave experience really, with table top football, pool, table tennis, snooker and CrazyGolf available and if you don’t fancy 'Happy Gilmore-ing' some balls down the range or playing golf, you could always just have a beer and a bacon cob in 'The DogHouse Bar'.

"In fact, as we say at CaddyShack, ‘Win or Lose……There’s Always Booze!’"

And, for Alcock, he will definitely be back there this weekend, come rain or shine, looking for another hole in one.