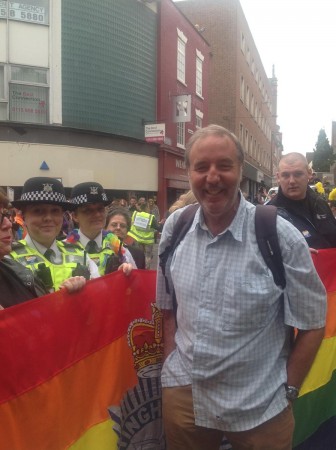 Chief Constable Craig Guildford and Police and Crime Commissioner Paddy Tipping led the Nottinghamshire Police team in the annual march alongside colleagues from British Transport Police Nottinghamshire. Following the march, officers and staff took the opportunity to meet with and speak to members of the community.

Chief Constable Craig Guildford said: "It was a privilege to attend Nottinghamshire Pride as your Chief Constable. Everyone should feel free to be themselves without fear of discrimination or prejudice. This freedom is long overdue and any form of hatred or violence which seeks to divide the people of Nottinghamshire will be met with a swift response from the Force."

PCC Paddy Tipping said: "Pride is a fantastic celebration of unity, acceptance and hope. It sends a clear message that hatred of any perceived difference will not be tolerated in Nottinghamshire. I was pleased and proud to join the thousands of people taking part in this year's event and hope everyone had a great time."

BRUNO MARS
LOCKED OUT OF HEAVEN
16 minutes ago
Buy

THE ORIGINAL
I LUV U BABY
40 minutes ago
Buy