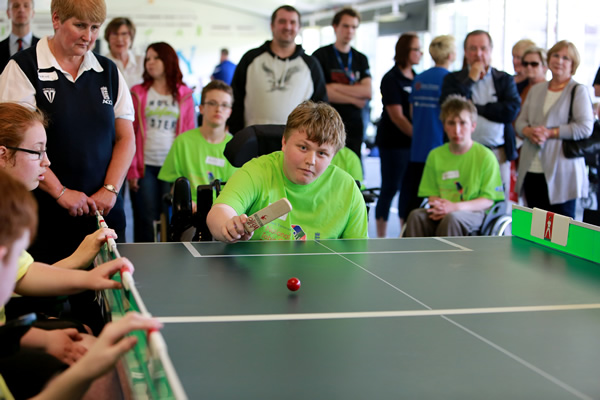 Pupils at a Mansfield school will be representing the East Midlands at Lord’s on Friday at the Lord’s Taverners Table Cricket Finals.

A team from Beech Academy are heading to the home of cricket to battle it out against nine other schools as they look to be crowned champions of the national competition organised by the Lord’s Taverners, the UK’s leading youth cricket and disability sports charity.

Played on a table tennis table with side panels and sliding fielders, a ball launcher, weighted plastic ball and wooden bat, table cricket enables young people with severe physical and learning disabilities to enjoy cricket and represent their school on a competitive basis.

And, thanks to the support of players of People’s Postcode Lottery and Ford who support the competition, the team from the school will be following in the footsteps of England captain Joe Root and playing at Lord’s.

Sarah Barrett, Director of Provision at the school, said: "Everyone in the team is very excited to be able to play at Lord’s, the home of cricket, and to represent our school and region at the Table Cricket Finals.

"It’s fantastic to see how the pupils have developed both as individuals and a group since they started playing table cricket - giving them the opportunity to meet new people, learn new skills, tactics, be part of a team, grow in confidence all while having fun. It’s going to be a great experience but also a tough competition and we are really looking forward to it."

The Lord’s Taverners table cricket competition in now in its 19th year and working with 30 county cricket boards across the UK, more than 300 schools took part in the 10 regional heats to qualify for the finals.

The game not only gives opportunities for competitive play and social integrations, it also improves life-skills including self-confidence, independence and social skills. An enhanced role for the captain also allows for the development of leadership skills.