​An Audience with Paul Gascoigne 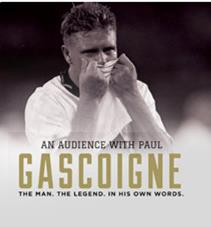 An Audience with Paul Gascoigne

England Football legend Paul Gascoigne is coming to Mansfield Palace Theatre on Friday evening, as HS Presents bring you an evening’s entertainment which includes comedy, music, football, tears and so much more.

‘Gazza’ has been described by the National Football Museum as the most naturally gifted English midfielder of his generation. After retiring from professional football, Paul’s life became dominated by his mental and emotional problems and his battle with booze.

Friday will be an ideal opportunity to hear his side of the story as the man himself shares all with the audience.

Pauls agent Terry Baker say’s despite a testing few days for the former Spurs and England man – he’s really looking forward to his visit to Mansfield.

“He loves these events, it keeps him going really and gives him something to look forward too. He was probably the best English footballer, maybe of all time, but certainly of a generation.”

“He talks about bits about his life mainly anecdotes and comedy but people still love him. He stills plays a bit of sport, he likes to play a bit of golf and tennis”

Teen Left With Fractured Skull And Broken Leg In Kirkby